it’s a drizzly, cold december weekend in brooklyn.  while i would normally just up and go to the gym, i have no desire to go today–twinge.

i have to give myself a bit of a break though. i’m coming off of having been extremely ill–i passed out on the floor just two weeks ago!

i haven’t been completely inactive.  once i felt better last saturday, i pushed all of my courage into a pile, laced up, and went out for a run.  i ran with mild caution throughout. in the middle of the run, i felt a little pukey and had to stop for a few seconds to collect myself. surprisingly, i ended up running a sub 30 5k.  the following thursday, i went to my regular spin class at the gym and felt pretty good.  i gave it 80%.  not bad.

this afternoon, todd and i peered grimly out the windows of our apartment at the outside world getting rained upon.  for a hot moment, we thought about running outside in the rain, but after seeing that the cars down below had their windshield wipers on at their highest settings, we decided to nix the idea.

but you know…i have to remember that i didn’t run for 37 freaking years!  it took me no time to become a runner, mid-life. i guess taking two weeks off from running isn’t the end of the world.

in the meantime, the world has a billion other things to offer.

and quality time with my awesome dog.

i hate it when it rains in nyc.  everything that is already difficult to do in the city is made even more difficult when it rains.  getting around sucks (both by foot and by train), and everything smells funkier than they already smell.

using an umbrella while walking the sidewalks of nyc is almost always a guaranteed failure of negotiation.  you WILL accidentally hit another person’s umbrella with yours and get splattered with rain water.  your umbrella WILL turn inside-out when the wind suddenly changes direction, and you WILL think you look like an idiot when it happens (and be right about it).

also, if you styled your hair in any way before leaving the apartment, it WILL end up hanging down the sides of your head by the time you get to work.  it WILL appear as though you did absolutely nothing to it.

run-stumbling down the soggy streets of manhattan seemed like a crazy pursuit, so i headed to the gym after work last night instead. the union square equinox has several woodway treadmills that have always jibed well with my fussy legs–which was perfect since my legs needed a break from the pounding they’ve been doing on the pavement.  once there, i hopped on one of the treadmills, and put four miles behind me. after finishing, i felt so good that i switched it back on and did hill repeats for a little under a mile.  not bad.

after staggering off the machine, i realized that my hair was all over the place and matted with sweat.  turns out that i let the rainy weather place me in such abject surrender to a “bad hair day” that i didn’t even care to remember put it up (like i always do) before i started my run.

ironically, my hair looks way better here than it did during the day.

the commute heading back home was less hellish than that morning’s commute to work.  i was psyched to give zero fucks about getting soaked since i was coming home from working out.  plus, i felt pretty awesome in general.  those four miles were pain-free! 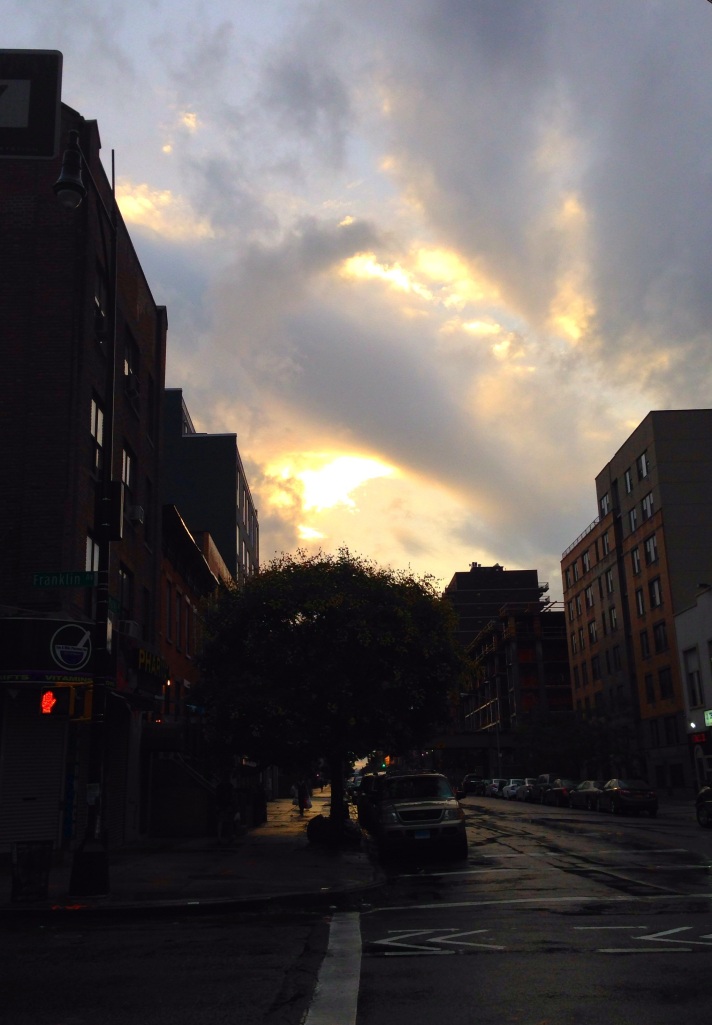 the drizzle let up just as i started walking home from my train stop. the sun also managed to make a quick cameo appearance between two storm clouds, dazzling myself and two other passersby into snapping photos of it.  with my umbrella tucked firmly under my arm, i walked the rest of the way home, smiling.

woah!  i’m almost half way through the 100 miles in 30 days challenge.  prior to starting the challenge, my monthly averages hovered around 50 miles, so pushing it up to 100 miles is a major increase.  while i’ve been generally gung-ho about it, my body feels like it’s about to stage an epic mutiny.  because of this, my last two runs had me feeling a little disconnected from my body. we all know that the first mile is a lie, right?  my legs are now taking up to two miles to realize what they’re supposed to be doing.

with my metabolism newly fired up, my eating habits are out of whack.  i’m hungry at all times, under any circumstances.  i’m hungry for the wrong things, and those wrong things taste so good.  at like, midnight.  much tummy troubles.  very ouch.  i haven’t felt this physically challenged since i was pregnant with my son!

can i have a little whine with my cheese?  if there’s cheese, then the answer is probably yes.

last night’s run was the long run of the week at 6 miles. knowing how my legs have been misbehaving, i paced myself so that i could make it through without rage-quitting in the middle of my planned route.  the splits were all over the place because i plodded down the west side highway taking my sweet-ass time, enjoying the view.  after coming off of the brooklyn bridge, i was nearly flattened by a frozen yogurt food truck that ran a red light. shaken, i managed to continue on to run the fastest split of my commute home.  there’s nothing like a sudden existential threat to get you moving along a little quicker!  also, yelling “WHAT THE FUCK?!?” will do it, too.

END_OF_DOCUMENT_TOKEN_TO_BE_REPLACED 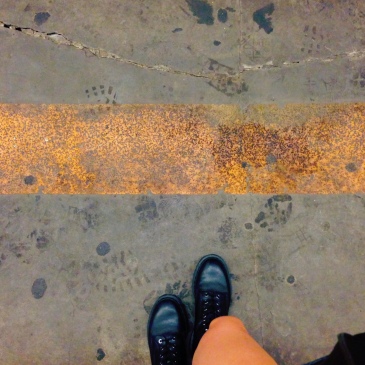 i spent the last few days chipping away at my goal of running 20 miles this week, and i’m happy to say that i surpassed it by half a mile as of today.  the week isn’t over yet, so we’ll see if I can throw a few more on top of the pile before the end of today.

while the 100 miles challenge has generally been a great motivator, i have to admit that i acted like a total baby about it this past thursday.  i wandered aimlessly around the apartment that evening, firmly committed to keeping my people clothes on for as long as possible.  my calves were buzzing with soreness from wednesday’s spin class and 4+ mile run, and i was feeling moody. my lack of motivation spiraled into dangerous territory, turning me into a world-class rationalizer.  i did some simple math and realized that i would have to double up on some miles over the weekend if i were to skip out on thursday’s run. no big deal, i thought.  i can totally do that..right?  but do i want to do that?  man, i don’t want to do that. ugh.

END_OF_DOCUMENT_TOKEN_TO_BE_REPLACED

after i decided to opt out of potential thunderstorms in central park on saturday, i plotted out a replacement run around the perimeter of nearby prospect park. i started out minding my speed, picked up my pace for the third mile, and then suffered a bit from heat exhaustion at mile four.  i got the shivers!  in eighty degree heat! my running app plotzed (because, human error) and i had to restart it once i realized it had gone silent on me.  i took the last mile to cool down (which i rarely do).  after pratfalling through the door of my apartment, i mentally high-fived myself over those hard-won five-plus miles.

sunday’s run had me slapping the pavement around fort greene park with my new balance trail runners.  they feel great both on the trails on the road, but i’ve been wearing them exclusively these past two weeks, and i’ve got to switch them out for another pair of shoes to keep the risk of injury down.  i have a pair in mind, ones that have been slowly disguising themselves with little dust bunny beards under my bureau.  anyway, the run itself was way, way better than sunday’s run.  i managed to do the following:

oh!  and yesterday, i made this handy-dandy spreadsheet to track my mileage for my 100 miles in 30 days caper. this is a great way to see it all laid out.

it’s monday, and it looks like i have a busy work week ahead of me.  i’m hoping i can get about twenty-ish miles in by next sunday.  in addition, i have a spin class at peloton in chelsea, a conor oberst/dawes concert in central park on tuesday, and sleep…i think getting those miles in by week’s end should be doable, if not an eyebrow knotting game of schedule-tetris.